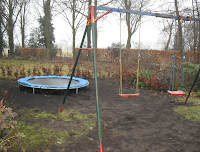 I know it's cool to say: 'When I was a kid I used to play for hours with just a twig and some dirt!' But who are we kidding here: playing with twigs and dirt has gotten a lot more competition since then!

Nowadays playing outside has to compete with playing on the Wii, Nintento, Playstation and computer. A twig just doesn't do it for kids anno 2012.

So I was very grateful to my uncle when he offered me his trampoline and swingset. I feel trampolines are must-haves to get kids to play outside. And for everyone who doesn't have an uncle with a trampoline: you can find some great trampolines in all shapes and sizes at Tesco Direct!

And if the kids still don't wanna play outside, just throw some dirt and twigs at them. Thát'll teach them to play outside!

What are your musthaves to get your kids away from their screens, and into the great outdoors?
Parenting