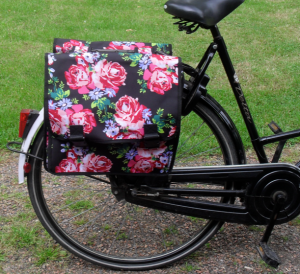 I love bicycle bags! I need them to get all my libary books back to the library. I also use them for grocery shopping. Bicycle bags are a great way to transport stuff, without having to carry it.


Though my husband may disagree, I think I'm a very easy going, low maintenance woman! But when it comes to bicycle bags I can be a bit fussy. I want them to be big, because who are we kidding: size dóés matter! And I like my bicycle bags to be feminine. And that means, they have to be pretty, preferably with lots of romantic flowers.


I had found a pair just like that. They were grey, and covered with pink roses. But after about two years they kind of ripped! I think I may have stuffed too much stuff into them. So I've been looking around for a new pair of bicycle bags to replace them, but it wasn't easy. I found cute bags that were too small, and boring grey bags that were the right size, but the wrong look.


I found a beautiful pair of new bicycle bags!


But last Thursday I suddenly found the perfect pair of bicycle bags! They're black with flowers on them. They contain about 54 ltr, which is a bit less than I'm used to, but they're made out of stronger material than my old pair of bicycle bags. And they match my black bike perfectly. They cost me 64 bucks, so they didn't come cheap. But I plan on using them for the next decade. And just think of all the gas I'll be saving by using my bike instead of our car. Really, it's an investment!

It's funny but my pretty bicycle bags make me enjoy riding my bike more!

Do you have bicycle bags?
Daily living