Look at me! I'm sewing my own skirt!

March 09, 2014
I've had about three years worth of weekly sewing lessons in my life. But somehow they never quite stuck. Everything I made, rarely made it out of my closet.
But lately I've been so much out of fashion I can't even find any jersey skirts with little flowers on them in thrift stores! So I decided to give sewing them myself another go. After all, what did I have to lose!

I bought a piece of dark blue fabric, to create a simple blue skirt. My 15-year old daughter helped cut the fabric, because I was a bit scared of messing up in the early stages. Then it was time for the big moment: I was going to sew. But apparently my sewing machine hadn't got the memo because the needle refused to budge.
So off to the store I went, where I bought it 25 years ago, when I was still a young girl for some advice.
'It's a goner!' the same gentleman who sold me the machine way back when, told me. 'But luckily I have a great second hand sewing machine available for only 175,-!'
And before I knew it, I had bought myself a brandnew old sewing machine. Because I really díd want to start sewing again.
So now the stakes are high! I've invested in fabric. And I've invested in a sewing machine.
There's nothing stopping me now, except my own insecurity about my sewing skills.

I'm just going to do it!

'You just have to do it!' the gentleman at the sewing machine stores told me.
So that's what I did. And this time it worked!
Look! 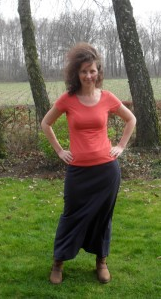