What happened to Jaime Lannister?

After plouging my way through the first three seasons, I had finally found a good reason to keep watching Game of Thrones: Jaime Lannister.


Game of Thrones: lots of political backstabbing in the dark


For those of you who don't know Game of Thrones: it's an HBO series with lots of violence, sex and about a gazillion storylines and characters. It took me about two seasons to figure out who was who!
Also, there's a lot of political backstabbing. Mostly done in the dark. Very annoying, because I find myself constantly looking at a black tv screen. Because in the days of Games of Thrones they didn't have electricity!


My reason to watch: Jaime Lannister


Anyway, like I said, after suffering through the first couple of seasons I got a big of a crush on Jaime Lannister. A good for nothing lout, who slowly but surely seems to have a heart after all. He just needs the love of a good woman!
So when I sat down for the first episode of season 4 I was looking forward to seeing Jaime again.


Jaime, oh Jaime, where art thou?


But when he first appeared I didn't even recognize him. It was like the first two seasons all over again! I was in the dark about who was who both figuratively and literally speaking. Because it was once again nighttime and therefore dark. Invest in some candles already!
'Did they get another actor to play Jaime?'I asked my eldest daughter, who didn't recognize him either. Gone was the irreverence, the mocking good-for-nothing-lout. Instead, I saw a clean cut, boring gentleman with short hair.
Did I mention Jaime had long hair?!
So we did a quick search on IMDB and what do you know?! It is the same actor! It's hard to believe.
Obviously a haircut can really destroy someone's looks. 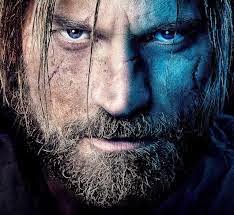 Suddenly the fact that most of the time it's so dark in Game of Thrones I can't see a thing, is comforting.
How do you feel about Game of Thrones?
Daily living