Red bra beneath a white shirt? 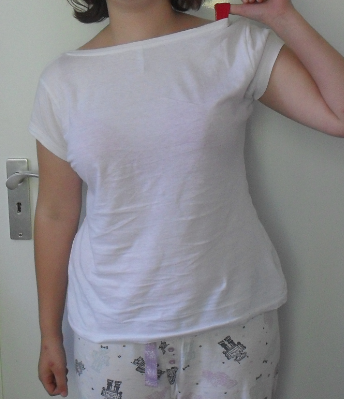 My youngest daughter needed some new bras, so I took her shopping. As she was trying on a red bra the sales lady said to me: 'You can wear a red bra underneath a white shirt! It won't shine through at all.'


You shouldn't argue with crazy people


I nodded obediently, but I thought: 'Yeah right... It's probably best to agree with her, because you shouldn't argue with crazy people'.

Then my daughter stepped out and lord and behold: the red bra was indeed invisible underneath her crisp white shirt! I could hardly believe it. The sales lady, who wasn't a crazy person after all, explained that it's all about skin tones. And red often matches your skin tone, thereby kind of disappearing!

In the picture you can see my daughter wearing the red bra. In this picture she's wearing a kind of see through pyjama shirt, and I can see the bra shining through a little bit.

But if you wear a solid white shirt, a red bra is a great solution to support your girls!

Did you know about the secret of the red bra?
Daily living