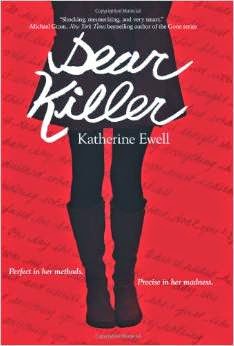 Some book plots are great! They sound so promising you can't wait to start reading. And then sometimes, it turns out the plot was the only good thing about the book.

That's what happened when I read Dear Killer by Katherine Ewell.


In Dear Killer we get to know seventeer year old Kit Ward. She seems to be an ordinary school girl. But what no one knows is that Kit is a murderer. Not only that: she's a perfect murderer. She kills her victims with her bare hands, thus leaving no trace.

It was Kit's mom who taught her how to kill people.


The story is set in London. And somewhere in London there's a public bathroom in a pub. That's where people can leave a letter requesting a murder. Kit reads the letters and then honors the writer's request. But at every murder she leaves the letter for the police to find.

Sounds good huh?! That's what I thought. But then I read the book.


I had such high hopes when I started reading. But I found Dear Killer quite boring. Or maybe I'm just too old to care about a 17 year old murderer. I felt the book lacked depth. It left me with lots of questions:

Dear Killer is available at Amazon.com for 12.70 USD.