10 lessons I learned from The Walking Dead! 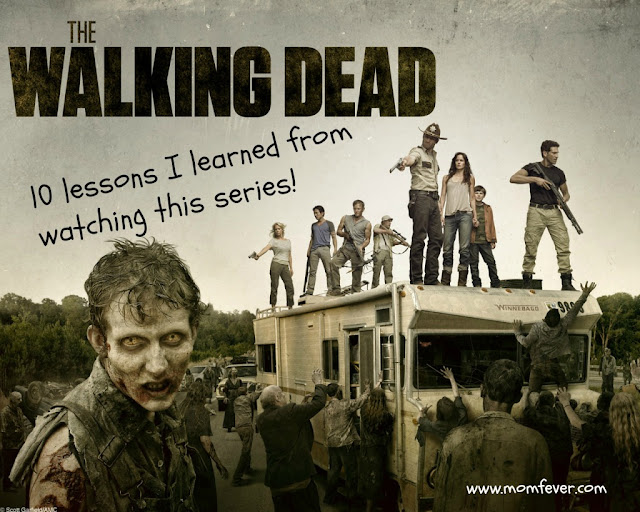 Have your ever watched The Walking Dead?

It's about a world that has gone to hell in a hand basket. Humanity has changed into zombies. And not the cuddly kind! They want to bite you and eat you up.

Luckily there are a few straggly survivors. I've gotten to known them pretty well after watching them for five seasons. And along the way I've learned a lot!

Let me share with you 10 important lessons I picked up from watching The Walking Dead.

Lesson number 1: Move to the country!


If the world ever gets struck with a scary zombie virus you should head on over to the country. Because there you can grow your own vegetables and hopefully draw water from your own well. Also, there'll be less zombies in the country.


Sometimes it can't be helped, and you have to spend the night in some scary woods. Create your own alarm system from a piece of string and hubcabs. That way if the zombies start crawling towards you, you can hear them coming.


Don' just shoot a zombie and be done with it. The only way to really kill a zombie is by stabbing them in the head. Or by smashing their head in with a hammer or a stone.


Do not watch The Walking Dead while you're eating! You'll spoil your appetite, because there's a lot of gore. With guts spilling out of stomachs... Yuck!


You gotta be quiet! Zombies are quite stupid. And as long as you keep quiet there's a good chance they won't even notice you're there.


Do you have a hankering for some fried fish? Get yourself someone else's sports jacket and rip out the coat netting. It will make a great fish net!


Are you thirsty and out of water? Find yourself a toilet and get some water out of the cistern.

Lesson number 7: A zombie apocalypse brings out the worst in people


After 5 seasons of The Walking Dead the zombies are the least of your worries. It's other people that are the most dangerous. Compared with some of them, the zombies are almost cuddly.


In spite of having terrible things happen to them, and losing people they loved, most people manage to get themselves together again and move on.


At first you'll be able to get food from supermarkets. But soon they'll be empty. Then you can get your supplies from abandoned houses. Make sure to make some noise before you enter a house. That way any zombies will come stumbling to the door where you can smash their heads in. And then do your grocery shopping.


Crossbows, swords and hammers are the preferred weapons. A gun makes noise, and runs out of bullets. Pull arrows out of zombies and use them again and again. Recycle!


After watching 5 seasons worth of episodes of The Walking Dead I know quite a lot about surviving in a world overrun by zombies. In theory that is.

However I wonder: would I be part of the group of survivors, or would I be the one ending up dead in the first few minuts of episode one.

I worry it's the latter.


For those of you how are wondering what in heaven's name I'm talking about, here's a nice trailer:

You can watch The Walking Dead on Netflix!

Do you watch The Walking Dead?