Bob the Builder looses his hand! 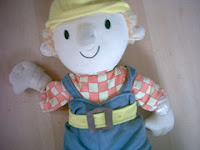 Bob the Builder, a well known handyman, has become the victim of what the police refer to as 'The Limber'. Bob was found with his hands cruelly separated from his body.

Bob's hand was taped to his arm

Luckily Bob managed to tape one of his hands back on. When we asked Bob for a comment he replied:

'I asked myself: Can we fix it?' And then I answered: Yes we can! and then I just did it.'

Bob has been released from the hospital


Doctors are not sure whether Bob's other hand can be saved.

Bob has been released from the hospital and is at home.

He is doing fine.
Daily living